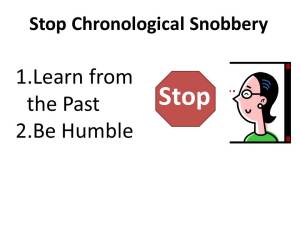 The 20th Century was birthed in chronological snobbery, as the Industrial Revolution of the 19th Century brought unparalleled prosperity to the western world, making it possible to be affluent and comfortable without necessarily being moral. Progress was the century’s theme, and progress meant affluence. In other words, economy trumped morality. The old vestiges of Christian virtue were discarded as out of fashion. In the same manner that we threw out bell-bottom jeans in the 1980’s, so, too, Americans threw out chastity in the 20th Century. Now, our chronological snobbery declares that the prudish sensibilities of our sexual past are forever positively usurped.

But notice the two-part definition from C.S. Lewis. In the first part, he mentions that old truths are dismissed as out of date. In the second, he notes that in the place of the old, a new set of “widespread assumptions” arise which are never even questioned. So, the common sense of our age has dismissed the old and blindly adopted the new.  We mock a “puritanical sexual morality,” while, at the same time, we applaud the supposed right of women to kill unwanted babies in the womb. Our chronological snobbery blinds us to the gruesome reality of our own age and robs us of truth which lies embedded in the wisdom of ages past.

As an antidote to the mind-numbing effects of chronological snobbery, the Bible encourages two alarmingly sober lessons. First, the Bible is plain that what has happened in the past is supposed to be remembered for our instruction. Paul says this very thing to the church at Corinth (1 Cor 10:11), urging them to learn from Israel’s mistakes:

Now these things happened to them as an example, and they were written for our instruction, upon whom the ends of the ages have come.

The Bible is clear that past generations made mistakes. In that way, the Bible sounds faintly similar to a central concept of chronological snobbery. But the similarity ends there, for the Bible assumes further that the present generation is every bit as capable of making the same mistake as the prior generation. Thus, the present generation is always in need of learning from the mistakes of the prior generation. Otherwise, as George Santayana said, ““Those who cannot remember the past are condemned to repeat it.”[2] Learn from the past so that you do not repeat the mistakes from it. This is the first biblical antidote to chronological snobbery.

The second biblical antidote to chronological snobbery is much simpler and, thus, even more profound: Don’t think too highly of yourself.  Paul says in Romans 12:3, “For through the grace given to me I say to everyone among you not to think more highly of himself than he ought to think; but to think so as to have sound judgment, as God has allotted to each a measure of faith.”

The reason we must be taught this is that we all tend to hold ourselves in high esteem, while holding others in contempt. We all think more highly of ourselves than we ought to think. This principle applies to each person in particular, as well as to humankind in general. Because such thinking is inherent in every person, it is also indicative of all of us. All of us are prone to think that we are advanced and enlightened in ways unfamiliar to the past. But it really is not so. The writer of Ecclesiastes got it right when he said (more than 25 centuries ago) that there is nothing new under the sun. Human nature has not changed.

Let us learn from the past in humility, realizing that the very mistakes which tripped up our predecessors are the same mistakes which threaten us. Let us also in humility humble ourselves, esteeming others as more honorable than ourselves. This means we esteem Augustine, Luther, Calvin, Owen, Bunyan, Edwards, and Spurgeon, as though they were actually more intelligent than we (which they were). They each made mistakes from which we can learn, but such learning should be humble and should correct us, conforming our thoughts more to the thoughts of Christ.

[2] George Santayana, The Life of Reason.

One thought on “Stop Chronological Snobbery”