When it comes to music, I got stuck in the ‘70’s.  In my mind, very little compares favorably to Carole King or James Taylor—or Gordon Lightfoot, America, or Seals and Crofts.  My favorite Spotify playlist is called “Dad’s Groovy Music” because since the ‘70’s, I have been groovy—the way a 33LP ought to be.

So it’s no wonder that I dig Crosby, Stills, and Nash’s most popular single: Southern Cross. (I know, it’s from the 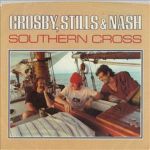 First—and I will admit that this first lesson applies more broadly than a single song—Southern Cross is about listening for redemption.  Some would argue that Christians ought not listen to secular music at all because it does not glorify God.  They would say that holiness demands our abstaining from Crosby, Stills, and Nash. I am not mocking their position.  The point is valid. I once cleansed myself of a 130 volume CD collection out of concern for holiness.  Music is a vehicle for carrying a message, and its message can easily carry us away from everything good. Never listen with an unguarded mind.  But if we listen with a guarded mind, we can find hints of redemption.

Life Lesson 1: In the New Testament, holiness looks less like abstention and more like redemption.  Meditate on Paul’s comments in Colossians 2:20-22, and you will see what I mean.[1]  Christians are holy through the redemption of Christ. We are alive to a new resurrected reality and, as such, ought to be those who point everything and everyone in this world to reality of Christ and His kingdom, which has begun.

So, with redemptive ears turned to the message of the Southern Cross, I offer two more life lessons.  These are easily grasped.  Stephen Sills wrote this song after his divorce in an attempt to find healing.  His crying out to his estranged wife is evident in the line: “In a noisy bar in Avalon, I tried to call you.”  He then admits that he understands why twice she ran away.

But in the chorus, he makes plain the permanence of marriage: “What heaven brought you and me cannot be forgotten.”  Stills even acknowledges that “spirits” are using him, and a larger voice is calling.  He gets that divorce cost him something real.  He gets that he needs something larger than himself if he will heal.  He looks to the heavens for his help but comes up short, finding only the Southern Cross. With redemptive ears, we can hear the permanence of eternal things even in secular lyrics.

Life Lesson Two: God has set eternity into every heart (Ecclesiastes 3:11). Listen to others with redemptive ears, and you will be able to point them to eternal realities.

Finally, realize that most folks live in a contradictory mindset.  While Stills gets the eternal nature of marriage, he feels also that it is lost. So, he must conclude, “Somebody fine will come along, Make me forget about loving you. At the Southern Cross.”  On the one hand, he sees that marriage is an eternal reality which cannot be forgotten.  On the other hand, when he feels all is lost, he professes belief that someone will come along who can erase it all.

If we listen closely to what others are saying, we might help them see that eternal things are real, and they need not give in to the contradiction.

[1] Colossians2:20ff, If you have died with Christ to the elementary principles of the world, why, as if you were living in the world, do you submit yourself to decrees, such as, 21 “Do not handle, do not taste, do not touch!” 22 (which all refer to things destined to perish with use)—in accordance with the commandments and teachings of men? 23 These are matters which have, to be sure, the appearance of wisdom in self-made religion and self-abasement and severe treatment of the body, but are of no value against fleshly indulgence (NASB).