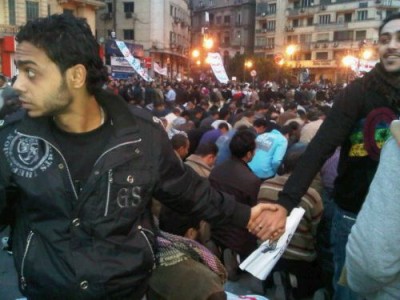 What about the Christians in Egypt? What are they doing during this revolution?

I forewarned (here) that the protests in Egypt might bring on more violence against Christians, and it has.  Paul Marshall of the Hudson Institute details one of the latest attacks in this article.  The Barnabas Fund chronicles other hardships Christians are facing in Egypt.

Yet, the Christians are not defeated by on-going violence against them.  I thought it might be interesting for you to consider the various ways which the Christian minority in Egypt is responding to this present crisis.

According to Jordan Sekulow in this account in the Washington Post, some Christians are joining in the protests with others who are standing for democracy in Egypt.

Over at the IMB, stories are being told about avenues opening up for the spread of the gospel in the midst of what otherwise might be chaos.  Indeed, there is a long history in Christianity of turning violence into opportunity for doing the good work of spreading the gospel (see Acts 8:1-4).

And, finally, there is this incredible photograph (which you probably will not see on mainstream outlets).  It shows Christians locking hands to encircle a group of Muslims, enabling them to carry out their prayer obligations.  (The picture was posted here).  Amazing.

3 thoughts on “What Are Christians Doing in Egypt?”