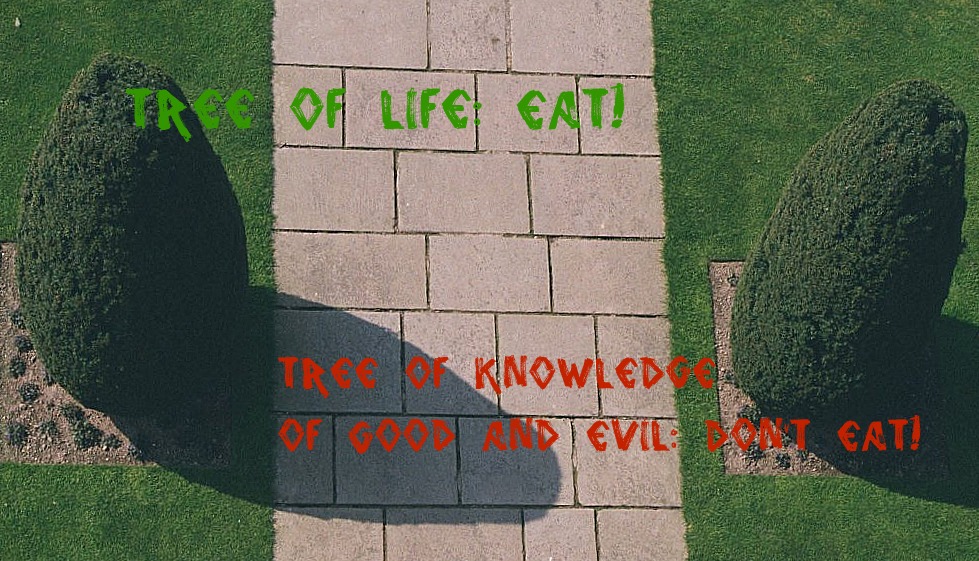 Recently, a friend and brother in Christ bombarded me with a dozen or so questions pertaining to aspects of the Christian faith which have recently been puzzling him.  I asked and received permission from him to post my responses here on this blog, thinking that if he has these questions, then others may have them also. So, I will be posting his questions and my responses in the coming days, hoping to help and encourage him and you. Feel free to add your responses and to send in your questions as well.

Why Did God Choose to Put the Tree of Life and the Tree of Knowledge in the Garden of Eden?

Interesting question. The smart aleck in me wants to answer, “Where else would you want Him to put them?”  But I know better than to mock an honest question!  Besides, we will see in just a moment that the two trees had to be at the center of the Garden.

If I understand the question rightly, then you are asking something like, “Why tempt Adam and Eve like this?”  Why is there both a tree of life and a tree of knowledge of good and evil?

I think the answer is simply profound. God takes ordinary elements and speaks profound life lessons through them (think of Jesus with bread and wine).  The two trees are named.  Notice the difference in the names.  The one is the tree of life, but the other is not the tree of death.  These two trees do not represent two ways to life; they only represent one way to live.  In other words, the two trees are not opposites.  Adam and Eve could not be tempted with death.  They had no desire for death, no appetite for death.  So, the second tree in the Garden is not the tree of death; it is the tree of knowledge of good and evil.

Why is this important? It underscores the nature of God, the nature of Adam and Eve, and the nature of the Fall.  Adam, Eve, and all of creation were created by God and declared “very good” (Gn 1:31).  Adam and Eve were not stuck in neutral, deciding whether to live or die. They weren’t caught in the balance between sinning and not sinning.  They were, in fact, good.  They were walking in fellowship with God.  They would not have been tempted to murder each other like their offspring were.  That would have been contrary to their natures.

However, it would not have been contrary to their natures to become more god-like.  They had a right desire for fellowship with God.  Therefore, becoming more god-like suited them like breast milk suits the nursing infant.  The tree of the knowledge of good and evil represented an increase in knowledge, an increase in wisdom, and an increase in understanding more of what God understood.  Surely, God Himself possessed infinite knowledge of good and evil.  So, for Adam and Eve to learn more of the knowledge God possessed would have been “natural” to them.

By nature, Adam and Eve would have been drawn to pursuing knowledge which would make them know more of what God knows.  And yet, this increase in knowledge was not good for them.  They knew that because God told them that it was not good for them.  He spoke a command against their partaking of the fruit from this tree.  So, in effect, Adam and Eve’s temptation came disguised in the form of two different good choices, each of which was according to their nature: Obeying God or seeking knowledge.

They did not need the knowledge of evil in order to accomplish the work God had given them.  They could have had a very fruitful life (literally!) by tending the Garden and enjoying fellowship with God.  They needed knowledge, for sure, but they did not need the knowledge of evil. Instead, what they needed more than anything else was to depend upon the living God.  So, the first tree God gave them was the Tree of Life (Gn 2:9).  If they had eaten of that tree, continuing to rely upon God for their very lives, they would have lived.

Instead, they ate of the forbidden tree which instantly gave them the knowledge of evil (namely, their own!).  They immediately learned of their nakedness.  They were immediately ashamed.  And they immediately had the sentence of death hanging upon them.  Instantly, they went from being alive to needing salvation.  The instant one forgets his dependence upon his creator, he stands in desperate need of a redeemer.

So, the answer to your question is that God put the two trees in the center of the Garden of Eden to proclaim the central truth to Adam and Eve (and to all humankind) that He alone is the creator and sustainer of life.  In addition, the Lord used the two trees further to display His unspeakable mercy.  Even after Adam and Eve rebelled against Him and unleashed on themselves the curse of death, still, God acted mercifully toward them, sending them out of the Garden and sealing it off before they could eat of the Tree of Life.  If they had eaten of the Tree of Life after they partook of the forbidden tree, they would likely have sealed the death sentence on humankind forever.  God’s purpose was not to allow that; instead, God had purposed from the beginning to provide salvation.  So, he removed them from the Garden.

On a final note, God planted both trees in the center of the Garden to make known His glory to all humankind.  He did not need to “wait and see” what would happen with Adam and Eve.  He knew before they were created how it would all turn out.  Thus, his choice of the trees was not coincidental.  He ordered all of it so that His glory would be revealed—even through the sinfulness of Adam and Eve.

God put the two trees in the middle of the Garden—the central focal point of all creation.  The two trees stood at the center of the universe.  Life flowed forth throughout the rest of creation from this very central point (see Gn 2:10-14).  At the center of creation was the single question, “Who is God?”  A very close question, related to the first, was, “Who is man?”  These two questions were hanging in the air like ripened fruit on two different trees in the midst of the Garden of Eden.  Both questions were quickly answered in the Fall.  As it turns out, God is holy, just, and merciful.  Man is sinful, under a curse, and in need of redemption.  That, I believe, is why God put the two trees in the midst of Eden. To answer the two most basic questions of life.

One thought on “Why the Tree of the Knowledge of Good and Evil?”