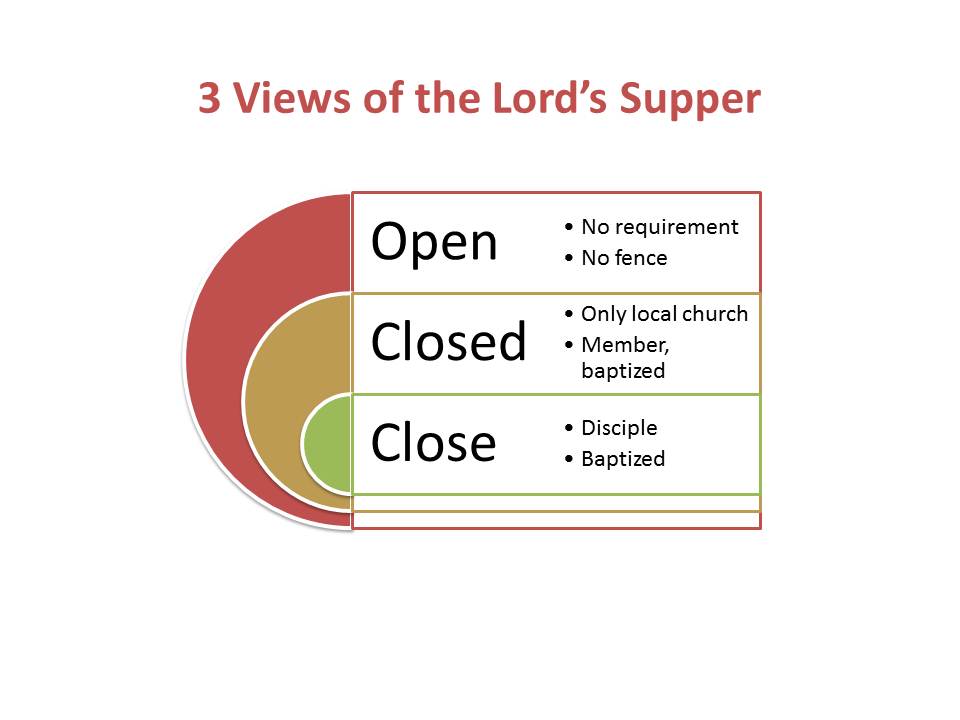 As a pastor, I have often had folks close to me ask (in separate—and as far as I know—unrelated incidents) for me to explain why Baptists don’t allow Presbyterians to fellowship with us in the Lord’s Supper. [The questions were not all that succinctly worded, but they were all to the same effect.]  So, I feel obliged to answer the Presbyterian question from a Baptist perspective.

Allow me to say at the outset that I am burdened by division in the body of Christ. I long for the day when there are no dividing walls disturbing the fellowship of the faithful.  One cannot help but feel the force of Robert Frost’s tension in “Mending Wall.” In that poem, one farmer is dutifully determined year after year to reconstruct a boundary wall between the two farms on the dubious authority of a single proverb: “Good fences make good neighbors.”

For his part, the second farmer at least asks what is being walled in and what is being walled out; nevertheless, without answering the question, the first farmer faithfully rebuilds the wall because “Good fences make good neighbors.”  Many Christians feel this poem pictures our present predicament with the Presbyterians.  The current evangelical ethos appears ready to test the proverb again.  To many evangelicals, Baptists appear as stubbornly stuck in fence-building as Frost’s farmer, perhaps explaining why I—a Baptist pastor—have suffered through a mini-explosion of pointed questions sympathetic toward the Presbyterian position.  I am left feeling sort of like a father who has had the distasteful task of taking candy away from his little daughter, only to watch her eyes pool with tears.

Feelings aside, the questions are legitimate and deserve a studied answer.  Though I profess to be no expert, I have been pondering the question for months now. Honestly, I desire to find a way to resolve the tension between myself and others of the Presbyterian persuasion.  I am personally affected by this tension nearly every day.  Yet, there are three things which I have not been able to reconcile.

First, though Baptists typically are those whose position is targeted for intolerant ire, the Baptists are not the only fence-builders in the Christian community.  Indeed, every Christian church and denomination builds fences around the Lord’s table.  Granted, a very few ecumenical churches (no longer evangelical in most cases) build the largest fence possible, allowing anyone without examination to partake of the Lord’s Supper.  But they are exceedingly rare and certainly not biblical.  The overwhelming majority of churches build a much smaller fence around fellowship.

Speaking of what it calls the sacraments of baptism and the Lord’s Supper, the Orthodox Presbyterian Book of Church Order says, “They are properly administered only in a gathering of the congregation for the public worship of God, baptism being a sacrament whereby the parties baptized are solemnly admitted into the visible church, and the Lord’s Supper signifying and sealing the communion of believers with Christ and with each other as members of his mystical body.”

All Christians build fences for the sake of the gospel.  Though we can bemoan the final outcome of such fence-building, let us not too hastily condemn the practice. As you will remember, Paul once informed a church that her members were getting sick and dying because of the manner in which some were partaking of the Lord’s Supper.  If we value Christ’s instructions at all, then we will treat with gravity the celebration of the Lord’s Supper.  We will likely agree with Christian history that the Lord’s Supper belongs to those who have been baptized.

Second, the issue between Baptists and Presbyterians on the topic of the Lord’s Supper is not really about the Lord’s Supper.  The issue is the significance of baptism with regard to church membership.  Baptists—whose very identity is tied to their convictions on this issue—insist that Baptism is a visible, initiatory rite for entrance into the church.

Rather than attempt to explain the various nuances between Roman Catholics, Lutherans, Episcopalians, and Presbyterians on the question of baptism, I think I would simply say that Baptists alone insist upon a clear text-by-text definition for the practice of baptism.  The clear teaching of the New Testament appears consistent with Acts 2:41, “So, then, those who had received his word were baptized…” (NASB).  Baptism is reserved for those who hear the Word of Christ and respond to it by faith.

As Paul explains in Romans 6:3-7, baptism is a testimonial picture of the power of the gospel in the believer’s life.  Baptism functions as a confession because of its signifying visually the gospel of our Lord.  Baptism, then, is for believers who have (through the power of the gospel of Jesus Christ) died to the old way of living in sin, have buried both their sin and their guilt in Christ’s cleansing flood, and have risen anew from the waters with the empowerment of the Resurrection working in them to ensure a new walk in the narrow way of life.

According to the New Testament, baptism is pretty much what The Baptist Faith and Message teaches that it is:

Christian baptism is the immersion of a believer in water in the name of the Father, the Son, and the Holy Spirit. It is an act of obedience symbolizing the believer’s faith in a crucified, buried, and risen Saviour, the believer’s death to sin, the burial of the old life, and the resurrection to walk in newness of life in Christ Jesus. It is a testimony to his faith in the final resurrection of the dead. Being a church ordinance, it is prerequisite to the privileges of church membership and to the Lord’s Supper. –Baptist Faith and Message, 2010.

All denominations pretty much agree that baptism must precede partaking of the Lord’s Supper.  We do not agree on the definition of baptism, although I would point out that even the OPC Book of Church Order recognizes that baptism ought to be for believers.  Accordingly, Presbyterians can say, “Baptism with water signifies and seals cleansing from sin by the blood and the Spirit of Christ, together with our death unto sin and our resurrection unto newness of life by virtue of the death and resurrection of Christ.”  -That could be said by a Baptist, although we would most likely quibble with the “sealing” part.

What a Baptist cannot say, which the Presbyterians can say, is, “The time of the outward application of the sign does not necessarily coincide with the inward work of the Holy Spirit which the sign represents and seals to us.”  I cannot find warrant for this application of baptism anywhere in the New Testament.  In fact, I can think of an instance in which people were baptized (“outward application of the sign”) but not born again of the Holy Spirit.  In Acts 19, Paul arrived in Ephesus to discover a group of professing believers who had been baptized into the promise of John the Baptist.  Paul explained that the promises John was preaching were fulfilled in Jesus Christ.  With that knowledge, these professing Christian adults gladly agreed to be “re-baptized,” as folks are wont to say nowadays.  Paul, I don’t believe, thought that he was re-baptizing them.  He thought he was baptizing them in the New Testament understanding of the term, complete with the regenerating work of the Holy Spirit.

Likewise, Baptists today are simply trying to maintain the biblical practice of keeping the ordinances in order: baptism, then the Lord’s Supper.  Baptism means what the New Testament declares that it means.  Baptists like me do not wish to withhold the Lord’s Supper fellowship from anyone who professes Christ, but we must also insist (again as all denominations do) that any who receive the sign of fellowship must first undergo baptism.  How is a Baptist supposed to ignore that which he believes is the biblical definition of baptism?

Finally, the issue of baptism is inherently and inextricably linked to church membership.  As stated, the real issue between Baptists and Presbyterians is the issue of the significance of baptism with regard to church membership.  Once again, most Christian churches place the same fence around membership as they do around the fellowship ordinance of the Lord’s Supper: Baptism.  Presbyterians agree with Baptists that one must be baptized in order to be a member of the church. Obviously, there is disagreement about what constitutes baptism.  As a result of the different definitions of baptism, the two groups end with a different definition of church.

Baptists believe that only those who receive the Word should be baptized. That appears to be the pattern of the New Testament (as mentioned above).  Historically, Baptists have referred to this practice as regenerate church membership. Who makes up the body of Christ if not the followers of Christ?  Who is the Bride of Christ if not those who have come to love Him through the gospel?  The one who has been taught to obey what Jesus commanded is the one who should be baptized and called a disciple (Matthew 28:18-20).  Where in the New Testament is the church made up of those who never believed or repented or exercised faith? 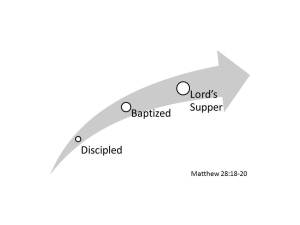 teaching correctly) equate the visible church with the covenant community of Israel, utilizing baptism as roughly equivalent to circumcision—a sign of the covenant people of God.  Thus, believers are baptized into the visible church, but so also are their children.  If there is a family in which the wife is a believer, and the husband is not, the Presbyterian Church will baptize their children into the visible church. As long as one parent is a believer, the children can be baptized into the church.  In this scenario, the church ends up being redefined.

Obviously, I am a Baptist. Thus, I think Presbyterians have a faulty definition both of baptism and of the church.  About these two important Christian concepts, we disagree.  We have learned to live with that disagreement.  Though I can think of a great many arguments for my positions on baptism and church, I will forego those arguments in order to stick to the single point of this article—explaining why Baptists look so intolerant on the matter of the Lord’s Supper.

6-4. Those only who have made a profession of faith in Christ, have been

baptized, and admitted by the Session to the Lord’s Table, are entitled to all

As Baptists, our problem is that we insist on defining baptism so closely to the New Testament practice. We may lament the consequences of such a definition, but we must ask in response, “how else are we to know the definition of the word?”  We must be guided by our study of the New Testament, and we must act according to the dictates of our consciences on the matter.  Whatever the New Testament says is baptism, that is what we must practice.

So, who should partake of Lord’s Supper?  All disciples of Christ.

Who are the disciples of Christ? Those who have learned to obey Christ and have been baptized (Matthew 28:18-20).