Chaos usually ensues after our worship service concludes. It isn’t the chaos of a charismatic explosion, filled with dancing or laughing or strange verbal utterances. It isn’t chaos of any negative sort. Rather, it’s the delightful chaos of slightly uncontrolled children rushing around in search of candy, suckers, and places to run.

My children are at least as crazy as the others, probably much more so. As is the case with any form of chaos, so it is true with Children-chaos; there is an urgent need for order. I am glad to provide such an ordering for my children. I am their father. Ordering them is part of what I’m called to do. 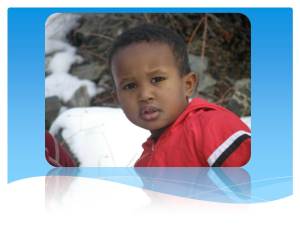 So yesterday after our services ended and the chaotic running routine had run its course, I called my youngest two sons out of the crowded horde of kids.  Kids were scurrying around like ants whose mound had been destroyed.  Out of the mass, I called my two sons and offered a simple, stern, and clear command of two little words: “Follow me.”  What happened next was both illustrative of individual personality and of ordinary Christian practice.

As personality goes, these two little people demonstrated much in the carrying out of my simple command. Both of the boys “sort of” obeyed dad’s directive. The older of the two always wants to be out front. He wants to know everything. He wants to do everything. He is naturally an “in-charge” kind of kid. He “obeyed” by first realizing that I was heading to our van. Then, he summarily stopped following and started leading. He ran out in front of me toward the van, confident of his leadership role, even though he had little knowledge of where the van was actually parked.

The younger is much less concerned to learn or know. He, being three, is concerned about being free and having fun. Little else—including obedience—is of much interest to him. Yet, he, too, “sort of” obeyed the command. He has learned through painful experience that it pays to honor dad’s commands, but he also has retained his strong-willed, free-spirited sense of autonomy. So, he obeyed by moving toward me in large, circular patterns, patterns which would allow him to make runs into his group of friends, take time to swing around a parking lot sign, and find a moment to skip or even climb a few steps. He meandered along a gigantic looping path that, technically, was in the direction I was headed and, thus, technically, followed my command.

My first thought upon seeing these semi-obedient sons was to get frustrated that they are unable to obey even the simplest of my commands. The second thought was to laugh at the fact that this one episode had exposed their personalities so clearly. The third thought was somewhat more profound.

I realized I was observing more than my semi-(dis)obedient sons. I was actually watching my own semi-(dis)obedient life behind my Savior’s simple command: Follow Me.  Repeatedly, our Lord commanded His followers—Follow Me. He said that if we were His sheep, we would hear His voice and obey it (John 10). He said that if we desired to serve Him, we must follow Him. We must leave the dead to bury the dead while we follow the creator and sustainer of life. We must recognize the broad way of destruction, while we follow our king through the narrow way of abundant life. We must follow Jesus as He makes us fishers of men.

And yet, we often follow like my younger son, in broad, meandering circles seeking worldly amusements to accompany faithful service. Countless 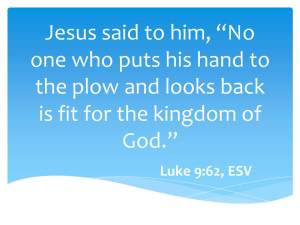 distractions bend our otherwise obedient walk. When we take our eyes off Jesus, or when our love is not burning hotly toward Him, our circular path of distracted service grows larger with worldly influence and smaller with the clarity and focus of faithful obedience.

Even when our zeal burns hot, we are in danger of running ahead of the Lord, just as my older son ran ahead of me. And like that older son, we run ahead with confidence without content. We run like Paul said the Jews were running (Romans 10:1-3) with zeal, but not in accordance with knowledge. There is a fine line between self-confidence and bold faith. One is obedient; the other is not quite right.

So I realized from my little after-church adventure that I shared the folly I found in my own sons. My hoped-for correction is to fix my eyes on Jesus, the author and finisher of faith, laying aside more and more of the distractions and encumbrances which dilute my obedience.  My further hope is to keep in step with the Spirit, not running ahead in fleshly arrogance or vain confidence.

May the Lord grant us all to keep both hands on the plow to work the earthly row we’ve been given. Let us not look back, to the left or to the right. But straight ahead, fixed on Christ, the Resurrection and the life. Our Savior has called us from the chaotic crowd. Let us hear His voice and follow Him.