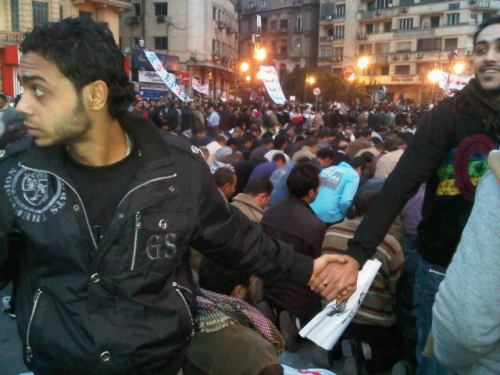 Part of the reason for the uncertainty is the uncertainty in the movement itself.  No one seems to have expected this uprising. There was no planned revolution.  No one is in charge of this sudden demand for democracy.  So, not surprisingly, Christians were surprised, too.  Christians were not sure of how to respond.  Protestant and Roman Catholic leaders were originally supportive of the status quo.  On February 1, they were still supportive of the Mubarek regime.  The Orthodox Christian Pope declared that the demonstrations were not from God.

Yet, by February 9th, Protestant, Roman Catholic, and Eastern Orthodox leaders were encouraging their followers to join the protests for freedom in Egypt.  Now, Christian lawyers and professionals are joining with other professionals in Egypt to draft a new constitution.  The hot wind blowing throughout Egypt these days is the wind of democratic change. While their air right now is as filled with the hope of freedom as our air will be filled with pollen in the spring, Egyptians still have a long way to go—especially Egyptian Christians.

The main point of contention in the constitution is Article 2, which states that Egypt is Islamic.  Some are insisting that the new Egypt be an Islamic Egypt.  Others are hoping that the new Egypt will be a free Egypt which will allow the Christian minority to express freedom of religion.  Christians represent about 10% of the population of Egypt.  Of that 10%, only a tiny fraction is Protestant.  Most of Egypt’s Christian population is Orthodox.

Will Christians be allowed in the new Islamic Egypt?  Christians are hoping so.  They are asking us to pray for it in fact.  As this report makes clear, Christians view the prospect of freedom of worship to be a “second miracle.”  They never dreamed of democratic freedom.  Now that it is on the horizon, might they dare dream of the freedom of religion?

Finally, I mentioned the prayer protection ring earlier, and it has happened again since. The good news is that it proved reciprocal.  Christians encircled Muslims to protect them during their Friday prayers, and Muslims surrounded Christians during their Sunday worship service to protect them from the protesters.  Surely, this is a good message for all to hear concerning the potential for peace in Egypt, but it is not at all the end of the matter.  There are years and years of historical tensions between Muslims and Christians in Egypt. The future remains an open question. So, maybe it is time for us to form our own prayer circle around Egypt for the protection of the saints.

One thought on “Christians in a Muslim Egypt”