Earlier in the week, I noted how the largest American mosque is equivocating on free speech. Now, two more stories have erupted which keep the issue on the table of concern for anyone who cares about basic human rights.

First, the U. N. Secretary General (Ban ki-moon) asserted that stringent limits should be placed on free speech. 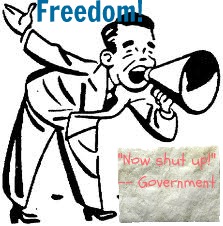 Specifically, he notes 2 general guides which would severely limit (if not eliminate altogether) free speech.

The first limit he thinks should be imposed is positive: Speech should be free as long as it promotes common justice and the common good. While this sounds “positive,” it is actually destructive. Who decides “common justice” and “common good”?  Most likely, it will be the group with the most uncommon political clout. This means there will be no minority dissent possible, as it would go against what is perceived as the common good. That this concern is accurate is reflected in the fact that Ban’s comments were made in response to the satirical movie on Islam. Any criticism of Islam would prove to be not for the “common good” because it might provoke violence.

The other limit Ban seeks is negative: Speech is not protected when it provokes or humiliates another person’s beliefs or values. What Ban is saying in this restriction is, basically, that free speech should no longer exist. It’s difficult to see what speech of any substance could reach this bar. Criticism of sexual beliefs would be deemed humiliating. Criticism of Muhammad or Islam would be humiliating. Ban’s idea of free speech is an offer for us all to accept the government’s great ventriloquist routine in which we just sit in the government’s lap while one voice does all the talking. The U.N. is leaning toward a ban on free speech.

The second story which has outed its discomfort with free speech is much closer to home, from the L.A. Times (ironically enough).  In this story, the author, Sarah Chayes, argues that the movie trailer may not meet the threshold for free speech because of its propensity to put people in imminent danger of violence.

Again, this is strange because, historically, when speech was considered violent and thus not free, it was speech in which someone stirred up someone else sympathetic to his cause for the expressed intention of provoking these allies to violence. When Muslims respond with violence to free speech acts, they are doing so against those who made the speech act.  In other words, the relationship is one of enemies, not of allies (see further here).

Even more insanely, the violence is typically directed toward the person(s) who made the speech act. In the case of the recent movie trailer that supposedly started the violence (but really did not), the makers of that movie are now in hiding because their lives have been threatened. So, again going back to a previous post, this ends free speech as we know it. Now, the person who speaks out is also guilty of inciting a riot—against himself!

From the standpoint of freedom, this shift in our thinking reflects the loss of free speech in any meaningful sense. More important, if this new and twisted way of understanding free speech is allowed to stand, then Christianity will effectively be outlawed. How can a Christian preach Christ exclusively without also insulting Islamic beliefs and values?

While many undoubtedly would welcome the demise of Christianity, they should also take note of the offense Muslims take against homosexuality and women’s rights. The Christians may be the first shut down, but they won’t be the last.

7 thoughts on “Are We Losing Our Free Speech? Two Stories Which Make the Point”