Are human beings exceptional? Is there something about humans which makes them intrinsically superior to dogs or ants or even poisonous stinkweed?

If you saw my post yesterday, then you will already know the answer is, “Yes!”  Human beings are intrinsically of greater value than weeds and wildlife. Jesus once told His 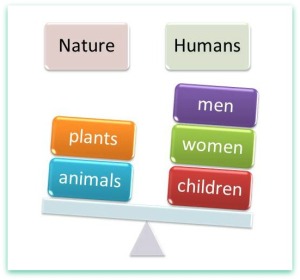 Having jettisoned the Bible and the God of whom that book speaks, many people now are not sure that humans excel plants and animals.  Just the other day, a friend told me of an incident concerning his dog. A colleague at work insisted that the dog was a part of his family. My friend held firm to the categories he uses to classify animals: Pets, Predators, and Food.  Never do animals attain the status of persons in his classic taxonomy.

Another friend of mine from back in the swampland moved to Colorado for his job, which happens to be surveying land. I asked him what the difference was between surveying in Colorado as opposed to surveying in Louisiana. His response was simple: In Louisiana, you must plan about two hours of machete work chopping away still unclassified weeds before beginning the survey work. In Colorado, not only can you not machete any living thing—including weeds, but you must also be extra careful not to damage anything growing on the land.

Now, don’t take the concept of human exceptionalism to mean that you can run roughshod over everything on the earth that isn’t human. That is not the point. The point is simply to affirm the undeniable reality that taking a machete to stinkweed is not a crime, while taking a machete to a child is heinous murder.

I am sure there are some who think this point is too simplistic and represents a straw man argument. After all, no one believes that weeds are equal to humans, right? Wrong.  Increasingly, countries like Bolivia and Ecuador, along with cities like Pittsburgh, Santa Monica, and, now, Yellow Springs, Ohio, are passing ordinances to recognize the “rights” of plants and animals.

Wesley J. Smith—a man who has done more than nearly anyone to uphold the intrinsic value of human beings—has detailed the Yellow Springs city ordinance calling for equal “rights” for nature.  As Smith points out, more than 20 cities in the U.S. have adopted similar ordinances, giving the equivalent of human rights to plants.

The aim of those passing such laws is to elevate the value of nature, but the arrow they shoot is off the mark. The result of their efforts is not to elevate nature but to denigrate humankind. Here’s a part of the Yellow Springs ordinance:

In addition, the ordinance recognizes the legally enforceable Rights of Nature to exist and flourish. Residents of the village shall possess legal standing to enforce those rights on behalf of natural communities and ecosystems.

Isn’t it interesting that it requires human beings to uphold the rights that are supposed to belong to the plants?

6 thoughts on “Are People Worth More than Plants?”