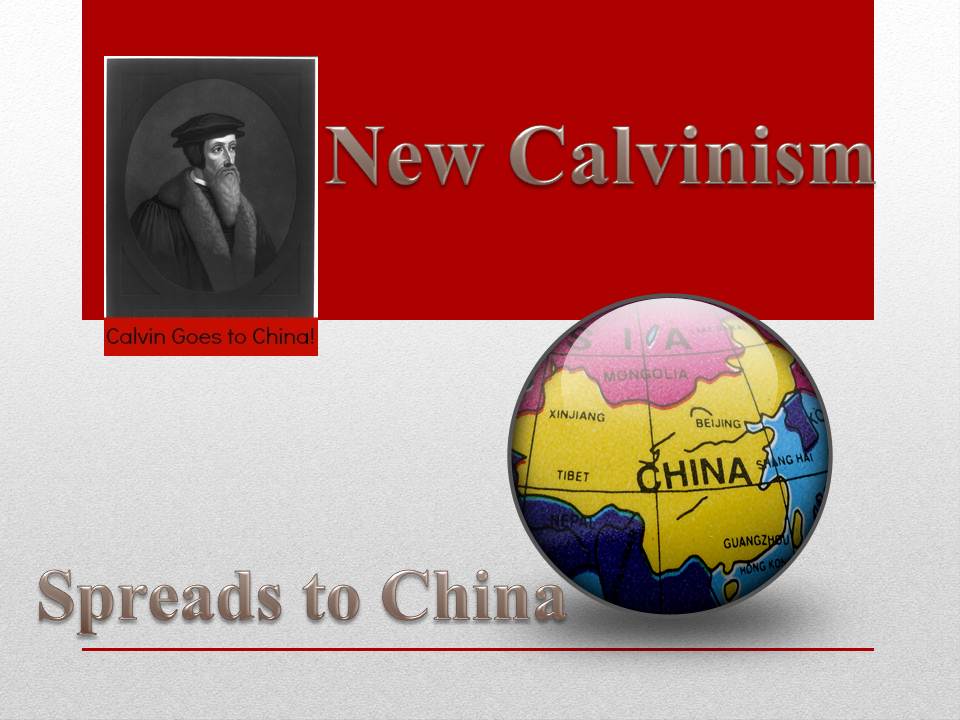 Time magazine provoked evangelical paroxysms back in 2009 when the publication unveiled its list of “10 Ideas Changing the World Right Now.” According to Time, New Calvinism was the number three idea at work reshaping America. (Don’t know what New Calvinism is? See here)

Five years on, New Calvinism is still going strong, so strong, in fact, that the New York Times has now taken notice of its growth. This New York Times article points to the rise of New Calvinism at evangelical conferences and in several denominations across the U.S., including Presbyterians and Baptists. The article points out that nearly one-third of Southern Baptist churches self-identify as “Calvinistic.”

The article points out also that the New Calvinist movement has more than a few detractors. Rather than engaging that debate, I have a different question to ponder. Is New Calvinism spreading beyond America and Europe? Specifically, are there Calvinists in the eastern world? Have Communists in China discovered predestination? Is Calvinism now spreading through the world’s most populated nation?

A review of recent literature demands an affirmative response: “Yes, there are Calvinists in China, and they seem to be spreading.”  Fredrick Fallman of Stockholm University has done a good bit of research on this question. He has a chapter titled “Calvin, Culture, and Christ,” in the book, Christianity in Contemporary China: Socio-cultural Perspectives. In his chapter on Calvinism, Fallman makes a strong case for the New Calvinism in China to be the product of universities and networks of highly educated elites. Here is how Fallman says it:

There is a tendency among some of the urban, unregistered churches to adhere to reformed theology, inspired by what in North America is sometimes known as “New Calvinism.” The focus is more on Puritan teachings than on John Calvin himself. Such communities draw much interest from young urbanites, and they seem to attract these young people because of their solid stance on moral issues and their non-relative beliefs, contrasting with society at large. Reformed Christianity may also appeal to the subconscious Confucian thought patterns and beliefs that linger among Chinese elite intellectuals in general. As both Christian elders and public intellectuals, the young urban church leaders also assume the traditional role of the intellectual, feeling his responsibility to act and assist when the nation is in danger, this time from moral decline.

No doubt, many in the cities and in the university are well-educated and, most likely, exposed to Calvinism through books and conversations in academic settings.  Likewise, I have no doubt that the certitude provided by reformed theology offers much-needed antidotes to the less desirable aspects of the brand of Communism which has run its course through China in the last 5-plus decades. Nevertheless, from mere instincts and from personal experience, I have the feeling that something more is happening.

I, for one, will not be at all surprised to discover a much broader base of support for New Calvinism in China. While Calvinism is gaining traction among the educated and the elite, it may be appealing to more than the upper crust of Chinese citizens. My guess is that there are plenty of “Calvinists” in the lower classes and in the rural areas of China as well. Here are three reasons I make this assertion.

First, Christianity in China blossomed and bore the majority of its present fruit through intense persecution. Stories of faithful saints like Samuel Lamb, Allen Yuan, and Li Ying reverberate with strong chords of God’s sovereignty. I’m not arguing that those who suffered intense persecution were by definition part of the New Calvinist movement. Instead, I am simply saying (in accord with the book of Revelation, for instance) that intense persecution demands a sovereign Christ. Thus, when the biblical and doctrinal support for such high thoughts of Christ arrives in Calvinistic form, it resonates with many grassroots-level saints.

The Sovereign Lord of Revelation has eyes of flaming fire and will return mounted for war to bring justice to His suffering saints.  Chinese Christians have suffered long bouts of persecution. They are not interested in anemic, pseudo-Freudian portraits of Jesus. The “New Calvinists” offer a Jesus of worthwhile authority making claims of eternal dominion.

Second, the New Calvinism movement in America has had a strong missionary impulse from the beginning. Many would consider John Piper one of

the “fathers” of the movement. His missionary zeal is legendary. His website mentions about 4 dozen languages around the world where his books have been translated. In addition, conferences and conventions within the movement have included pastors, laymen, missionaries, and teachers from around the world. Congregations in remote parts of Africa were livestreaming the recent Together for the Gospel (T4G) event in Louisville, KY. I know also that people living in the remote northwest portion of China were in attendance at the first T4G event eight years ago.

The endurance of Christianity is at least partially the result of those receiving truth sharing it unsparingly. Obviously, none of this proves anything. It is, to be sure, anecdotal. One could easily assert that those who attend such events or read such books would also be from the affluent, educated classes of China’s citizens. I’m simply guessing that some of them are not.

And even if those who have attended the conferences and have read the New Calvinism literature have all been from the affluent, elite strata of China society, they have undoubtedly not been silent. They have been leveraging their influence for the sake of good theology. Thus, I’m guessing their teaching is spreading.

Finally, Piper is not the only one publishing “New Calvinist” literature in China. Other publishers are legally publishing reformed literature in China. Again, this literature may first go to the educated in easy-to-reach urban centers. But it will not end there. Perhaps it already has spread beyond the urban areas and further into the heart of China. It may well be the case—as with Calvinism in America; and as with the house church movement in China—that the strong roots of fervent Christianity are already quite strong in Communist China. The New York Times caught up with New Calvinism 5 years behind Time. So, what  do you think will be the report on Calvinism coming out of China in 2019?  What do you hope is the report?

2 thoughts on “Calvin Goes to China? A Look at How New Calvinism Is Spreading in China”