In Acts 2, the Apostle Peter stood in the assembly and proclaimed Jesus Christ as Lord. Though he had organized no great event, nor had he enlisted an army of volunteers to corral the crowds, Peter saw great fruit as three thousand souls were saved and added to the church in a single day. 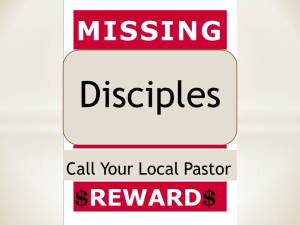 While we typically do not see such mass conversions, we do still see and hear stories on top of stories of sinners being saved by God’s grace. I was recently in the presence of a gifted evangelist who had many such stories to tell. Here is his story of the seven missing disciples.

Two weeks ago, my evangelist friend had the privilege of scheduling 16 baptisms in a single day—Quite a day indeed for a church that normally runs only 60 or 70 in attendance. When the day came for the baptismal celebrations, only nine of his disciples came forward. There were seven disciples missing. Why? Where were the seven missing disciples?

Cynically, we might think that they were not really disciples after all; they had, perhaps, made a profession of faith but were not willing to put forth even the effort to seek the baptismal waters as a first step of obedience to Christ’s commands. This was not the case. In fact, my evangelist friend queries his candidates thoroughly in two areas before he will agree to baptize. The first area he investigates is the nature of their profession of faith in Christ. He seeks to make sure they understand that Jesus Christ is a savior from sinners and Lord of life. Thus, obedience is not optional. The second area he examines is just how serious the profession of faith is; so he asks his candidates if they are willing to die for their faith in Christ. He says he would rather have 10 serious Christians in his congregation than a 1,000 of the half-hearted variety. So, why were 7 disciples missing?

They were forbidden by their parents to attend their own baptisms. These were high school students whose parents were not believers. Because these students were around 17 and still living at home, their parents had an authoritative command of their lives and actions. And the parents forbid these young adults from being baptized. There are two surprising conclusions to this drama.

First, the shear fact that 44% of baptismal candidates were forbidden by their parents—in America—from celebrating baptism as followers of Christ is astounding! Christ and Christianity are falling from favor in large swaths of American culture.

The second surprising aspect of this conversion saga is the response of the pastor to this unsettling situation. It really is not that surprising that the pastor told these missing disciples that they must honor their father and their mother—that after all is a biblical command from the Old Testament that is reiterated in the New (Ephesians 6 for instance). What is surprising is how thoroughly he expected their obedience to this command. My evangelist (pastor) friend explained to these would-be disciples that God has given them good parents who are willing to make difficult decisions on the basis of their own convictions. He told these wishing-to-be-baptized professors of faith that they weren’t commanded simply to obey their parents but to honor them. Thus, they must see their parents’ actions in the most honorable light—even if they all disagree as to the consequence of the parents’ decision.

Do you think he gave them good advice, based on Ephesians 6?

6 Children, obey your parents in the Lord, for this is right. 2 Honor your father and mother(which is the first commandment with a promise), 3 so that it may be well with you, and that you may live long on the earth.

How would you handle it if those you have disciple into faith cannot then be baptized because of parental prohibition? What if they will not be baptized out of fear of persecution?

5 thoughts on “What Happened to the 7 Missing Disciples?”