“Most controversies would soon be ended, if those engaged in them would first accurately define their terms, and then adhere to their definitions.” 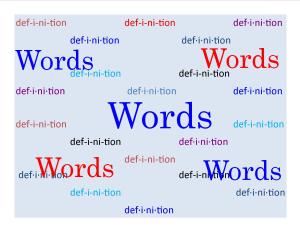 But words do not always come as docile tides bathing a white sand shore. Words break upon our ears and often crash into our minds challenging our very existence. As the existentialist Sartre declared, “Words are loaded pistols.” And that is often true. Defining words can be a dangerous game because words are the means by which reality takes its shape.  Consider, for example, how the Nazis defined treason and loyalty. And consider the implications for Germany and the world.

In our own culture, consider how important it is to define the word person. It has become a deadly word for babies developing in the womb because they have been excluded by definition from the semantic range of the word person. So, you see, subtle changes in the definition of words can have cataclysmic long term effects for us. Definitions are exceedingly important.

Two particular words Christians must define in our own day are marriage and persecution. The first is necessary because the word is being redefined.  The Defense of Marriage Act (DOMA) has fallen on notoriously difficult times, and marriage is now successfully being redefined to include same sex unions. In fact, as I’ve noted in prior posts, the new definition of marriage demands no boundaries on the basis of avoiding all discrimination. A recent federal case in Utah may now allow group marriages (read about it here).

Because marriage is now redefined, Christians will be tested on whether or not they believe what they have been saying about their own definition.  Do we as Christians believe God’s monogamous design for heterosexual marriage? Will Christians stand on these convictions? What if group marriages, gay marriages, or even bestial marriages become matters of civil rights? Will Christians remain steadfast in their biblical convictions? Will we pay the price in persecution? What if churches will lose their tax exempt status as a result of monogamous marriage commitments? What if pastors are convicted of civil rights crimes—or hate crimes—and sent to jail for refusing to marry a small group of lovers?

Persecution will likely flow from the deluge of court decisions against traditional marriage. Thus, Christians ought to start defining persecution so we understand what and why we are suffering.  Persecution means many things to many different people. I read an article recently which stated that wild birds were being persecuted in northern England.  Whatever the journalist covering birdcrime in Great Britain meant by his use of the word persecuted, the Christian must understand it much differently. Both Christians and birds of prey can be hunted and threatened with extinction, but Christians alone are human beings created in the image of God and charged with witnessing to His glory. Birds are not people and, thus, not created in God’s image.  Persecuting birds is not the same as persecuting Christians. But Christians will be persecuted. Thus, persecution is a concept which needs to be properly defined. Here is a good, biblical definition of persecution:

Persecution is a retaliatory action against the revelation of the righteousness of God in Christ which is represented or proclaimed by the followers of Jesus Christ.

The definition is helpful for Christians so we can test ourselves (as Peter commands) to make sure our suffering happens because of Christ and His righteousness, not because of our own stupidity, arrogance, or offensive behavior. The definition is also helpful so we can experience the full joy of the blessings of Christ (Matthew 5:10-12). Finally, the definition is important because we will likely be facing persecution of a more intense nature than at any time in America’s history.

Here we return to Edwards’s point. Definitions do provide clarity and can lead to unity. Often, however, the clarity itself leads to controversy.  Such controversy by no means argues for de-emphasizing the need for definitions. Rather, the controversy serves further to clarify where to stand, when to stand, and how to stand. And if you don’t stand for something, you’ll fall for anything. If you do stand for something as a Christian, you will face persecution. Define your terms so you will know why you suffer.

And as you suffer, remember the words of your great Shepherd: “Blessed are you.”  Learn from this Shepherd the definition of being blessed—even when you cannot be united on account of the words you have learned to define.

8 thoughts on “Why Give a Definition of Christian Persecution?”